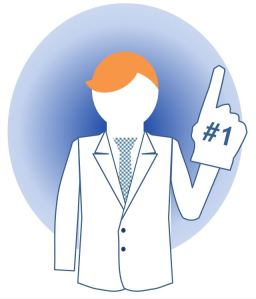 I really have no additional comment here because I would veer away from leadership and into politics.  That would be of no use to anyone.

It pretty much speaks for itself.

In my opinion, I think the best way to view Donald Trump’s current activities as not a part of a presidential campaign, but more as an exercise in branding.  He has never had as much press coverage as a businessman than he has had a potential nominee.

I am working on a paper with my daughter this week and we are discussing brand awareness and brand recognition.  It came to my mind in those discussion that even Donald Trump (a very, very , very, very rich man according to Mr. Trump) could not afford to buy the amount of media coverage generated in print, broadcast coverage, Internet chatter, and water fountain discussion that has been created since the start of his GOP campaign.

He really has no interest in politics, his interest is in starting a discussion… any discussion that features his name.  His flame war attacks keep his name at the top of every news cycle.  It is a genius manipulation of the media (well… genius in a way that makes me want to shower).

His return on this investment will be far above even his wildest imagination.

Either way the campaign goes, he wins notoriety.

<Update Mario Almonte probably said it better than I… http://www.huffingtonpost.com/mario-almonte/relax-america-donald-trum_b_7983354.html?ncid=txtlnkusaolp00000592&gt;

“I do whine because I want to win and I’m not happy about not winning and I am a whiner and I keep whining and whining until I win,” Trump told CNN’s Chris Cuomo on Tuesday. http://www.cnn.com/2015/08/11/politics/donald-trump-refutes-third-party-run-report/index.html