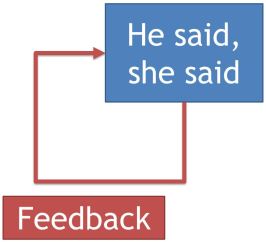 I had some interesting responses from my leadership as a suit analogy (posting on 30 July 2015).

I thought the feedback would be beneficial to share because the comments are representative of those informal leadership discussions we have all shared a thousand times at lunch, in a classroom, or sitting in a bar.

These exchanges are characteristic of the general conversation of leadership and is a part of the daily challenge of leadership… how do we just discuss it?

The conversation becomes a little circular, but since it all sounds reasonable we just nod our heads with no path to progress.

I present the comments as written.  I know this post is long, so you can skip to the rant… er… conclusion at the end for a summary.

(A quick note here… please forgive any typos or grammar errors in the comments themselves.  As anyone who has ever left a comment in a comment section, finger slippage can be an occupational hazard.  I made no changes to the comments to avoid the possibility of editing out intent.  Please, overlook the grammar to read the heart of the message.
Any errors on my part at are totally mine, unless they are really stupid, then let’s go with finger slippage…)

Leadership style of individual Leader is broadly inherent in his personality. During emergencies he may change his “stance” but his Personality & Style remains and he retraces to his normal style once the emergency is over. Even during emergency he will not be outright Coercive if his inherent style is democratic.

Mr. Wrede.
You pose a leadership conundrum that faces most of us: “…circumstances define your leadership style…” sounds wise and correct. At the same time, changing leadership style to fit the circumstance cannot be compared to changing a suit to fit the occasion. Only the very talented/skilled can transition their style effectively along the democratic to base coercion continuum.
I find that Mr. AKB describes a common scenario: Leaders may try to adapt their style to circumstance but, faced with high stress situations, may default to a core (inherent) style. Training and clear self-awareness may mitigate this default characteristic.

My response to the first set…

First, thanks for both of your comments. I appreciate your thoughtful input.
My main argument is offer the point of view that we make the mistake of teaching new leaders that their personality is their leadership style. If they are (or think they are) too authoritarian, they set up the possibility of creating a toxic work environment that becomes dysfunctional over time. If they are too democratic, they create the impression of being indecisive.
The affiliative style of leadership, in my opinion, is the best default style in the long-term that maintains the leader/follower relationship, but promotes an inclusive social dynamic within the group. If that is not the natural mode for some people, then it is a skill they need to learn.
There is the additional nuance of working in a transactional situation where it is difficult to engage with people personally or emotionally. A transformational work environment is more open to personal motivations and loyalties.
It is a point of metacognition, the knowing of knowing. You know that during a crisis, an authoritarian style is appropriate. You know that some issues in daily operations can be put to a vote that promotes an inclusive outcome. So you think about those times before they present themselves, then you are prepared with the appropriate style.
If we believe that leadership style is an inherent personality trait, we excuse poor leaders by saying “That’s just the way he/she is.”… we accept the damage they cause. By reframing leadership style from a personality trait to a cognitive skill, we make it teachable.
Being an authoritarian or a democratic leader has its place, but as exceptions when circumstances meet appropriate conditions. That is the analogy of the suit.
When the conditions exist that no longer require the suit of authority or the democratic cut, then the leader resumes wearing the affiliative, casual, resort wear.
Again, thank you for your comments,
Ken

My response to the second set…

I think, a top leader, has a management style,that is subject to circumstances, time frames, people that he deals with, both above he and below he. He MUST be results driven.  He must steer his companies ship, with foresight, with commitment, with communication, with listening and above all, with action and results. This is done, with ALL his employees…He cannot be of one stance and type, like a jungle fighter, or clinician, etc.. he must contain traits of all, to be an accomplished major exec.

Effective leadership is believed to be an aptitude that some people have for such.
The problem that we have is that in a capitalistic society leadership seems to be more concentrating on profits. The majority of corporations consider an individual to be a good leader if they can produce a good bottom line. Such a leadership style rarely ever benefits the employees

I believe Steve Cove<sic> touched upon this area of personality vs character. Great leaders focus less on styles and more on true character that creates a charisma to influence people. Persons like Gandhi, Nelson Mandela, Mother Teresa, John F Kennedy are best examples of true leaders.

My response to the second set

K.W. Wrede
Each of you makes good points within the context of your comments and I completely understand the intent of your points. So, I apologize for being self-referential here, but in the interest of me not writing some ridiculously long comment…
These are great comments remind me of one of my prime frustrations of leadership discussions, the definition of leadership. We all nod our heads because we each know what we mean, but the context is fluid. I addressed this point in a previous post (https://kwwrede.com/2015/01/22/leadership-confusion/).
I had to improve my definition over time a bit which I explained in a later posting. (https://kwwrede.com/2015/05/21/power-is-not-leadership/).
Leadership is a confluence of two social roles.
• The follower surrenders to some authority (power source as defined above).
• The leader fills the vacuum and assumes ethical and accountable authority over a follower.
It is from this basis that my discussions extend.
For the purpose of defined common terms, I also discuss a functional demarcation between a manager and a leader in another posting (https://kwwrede.com/2015/04/23/no-youre-not-a-leader/).
(Please don’t view this as homework)
Thank you for your frank and considered thoughts.

The comments above are not about being right or wrong, but in my experience they reflect a common rhythm of the conversation.  It is rhythm prevents us from bringing the conversation of leadership forward and creating replicable results.  It is no wonder that leadership programs are considered ineffective.

“If names be not correct, language is not in
accordance with the truth of things.”
(Confucius, The Analects)

First, we speak at cross purposes without specific definitions of terms.  I know it is pedantic, but I always go back to defining terms.  Based on the terms, we can then address the first principles that define a conceptual playing field that we can use to predict success.  I seek to define leadership in a broad enough manner that it includes all organization types and at all levels within an organization.  If we narrow the definition too much (such as only charisma), we have no way to move forward and improve ourselves.  We confuse celebrity with leadership.

Second, if we speak of leadership at such a highly philosophical level then we assume it is only for the most gifted.  Gandhi, Nelson Mandela, Mother Teresa, John F. Kennedy are specifically mentioned, but I suggest that, with the exception of Mandela (perhaps JFK), they were certainly powerful people, but questionable in terms of leadership (I discuss power vs. leadership here).  If I concede for just a second that they were good leaders (but only for the time it takes you to read this example), are we saying that people of those qualities are the only ones worthy of the term “Leader”?  Shall we simply surrender the leadership development or hope that Mother Mahatma Nelson Kennedy is waiting to guide us to success?

If we make leadership a higher philosophical calling or an immutable personality trait, we limit ourselves to the mimicking of famous motivational comments from history written on posters on our walls.  We surrender because we assume if you aren’t Mother Mahatma Nelson Kennedy, you are only a manager and we’ll have to make do with what your limited skills because you lack charisma.

I do not accept those premises.

If we want to move leadership forward, we have to accept that it is a functional skill that can be learned and perfected.  If it stays in the philosophical realm or is considered inherent like eye color, we can have lovely high-level discussions, but there is no actionable path to move forward.  We surrender before we start.

Leadership development has been historically ineffective because it treats leadership like a symptom of management.  Leadership is an acquired skill in the application of power.  It is cognitive and, therefore, teachable.

Learn the cognitive aspect, modify behavior, create a healthy organizational culture, and save the cheerleader.